When SAC was created it was originally headquartered at Bolling Field, Washington DC but quickly moved to Andrews Field, Maryland. With it’s coastal location vulnerable to bomber attack it was prevalent that SAC Headquarters (aka Command Center) be better positioned to survive a first strike bomber assault. At 0100 on 9 November 1948 SAC Headquarters transferred from Andrews AFB to Offutt AFB, NE. The new HQ was housed in the modest Building A of the WWII Martin Bomber Plant Complex. 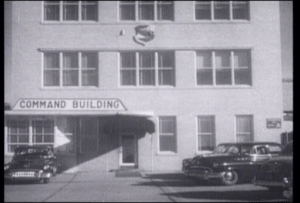 When LGEN LeMay took over SAC it was already believed that piloting and navigational skills tightened during WWII had atrophied amidst unrealistic bomber training. In January 1949 LeMay ordered a radar scored bomb run over Wright-Patterson AFB, OH. Since he already knew that SAC crews lacked current reconnaissance photos and maps, LeMay had crews issued three year old maps and photos of the Dayton, OH area. The result of the exercise was dismal, out of 303 bomb runs nearly two-thirds were more than 1,000 meters off target. Such an error in the bombing of Nagasaki would have left the target unharmed. 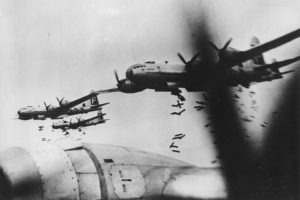 In a demonstration of global reach, SAC’s Boeing B-50A Superfortress (s/n 46-010) “Lucky Lady II” of the 43rd Bomb Group became the first aircraft to complete a non-stop round-the-world flight on March 2, 1949. Through the aide of four mid-air re-fuelings by KB-29s “Lucky Lady II” covered 23,452 miles in 94 hrs and 1 min. Capt James Gallagher commanded the crew of 14 through the round-the-world trip beginning and ending at Carswell AFB, TX receiving the MacKay Trophy honoring the most outstanding flight of the year. 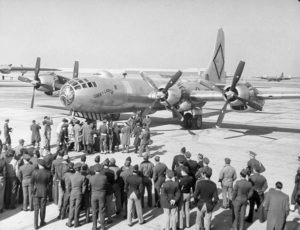 Just 10 days after the astounding flight of “Lucky Lady II” a Convair B-36 Peacemaker from SAC’s 7th Bomb Wing set a long distance record when it completed a 9,600 mile flight in 43 hours 37 minutes without refueling, demonstrating SAC’s reach. Capt Roy Showalter piloted the aircraft and lead a crew of 12 who also conducted tests and experiments to evaluate the ability of the B-36 to penetrate a realistic air defense system. By the end of the year then Secretary of the Air Force noted “Existence of the strategic atomic striking force is the greatest deterrent in the world today to the start of another global war.”

Following World War II, President Truman called for a dramatic reduction of military spending. By 1948 the Navy and its plan for a new carrier, already named USS United States (and the battle group that goes with it), would be replaced by Strategic Air Commands fleet of long range heavy nuclear B-36 bombers. Dubbed Revolt of the Admirals, drastic and dramatic steps by the Navy resulted in heated debates in Congress, calls for investigations, and the ultimate removal of the Secretary of Defense, Admiral James V. Forrestal (March 1949). The advances with in-flight refueling, the round-the-world flight of B-50 Lucky Lady II (March 1949) and a record setting un-refueled flight by a B-36; leadership and public opinion sided with the bombers. 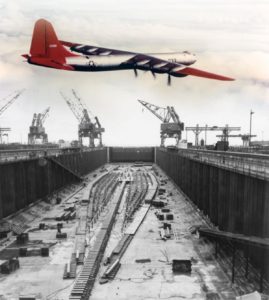