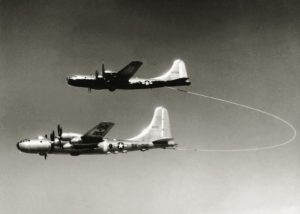 After seeing the dismal performance in the simulated bombing mission over Wright-Patterson AFB, LGEN LeMay push his crews hard, nearly to the breaking point. In a bold move to increase crew stability and proficiency as well as reward outstanding combat crew performance, LGEN LeMay received special permission to award “spot-promotions”. Following the October 1949 SAC Bombing Competition and seeing marked improvement, LeMay promoted on 20 December, 237 aircraft commanders and other crew members from the rank first lieutenant to the temporary rank of captain. Expanded in 1950 and 1951 to include temporary promotions to major, lieutenant colonel, technical sergeant, and master sergeant. Winning crews in key events of the Bombing Competition typically received the spot promotions. Should an entire crew or an individual fail to maintain the high level of proficiency, the temporary promotion could be lost.

Just like Germany, Korea was divided after WWII. The north would be influenced by the Soviet Union while the United States would direct the south. The next several years witnessed mutual posturing and elections with the expected results of solidifying relations between North Korea and China and Soviet Union as well as those between South Korea and the United States. On 25 June 1950, with the presumptive support of China and Soviet Union, North Korea invaded South Korea. By 3 July USAF Chief of Staff GEN Hoyt Vandenberg ordered Strategic Air Commands 22nd and 92nd Bomb Groups to deploy their B-29s to the Far East and join the 19th Bomb Group to form the Far East Bomber Command. SAC’s 31st Strategic Reconnaissance Squadron was on TDY to Kadena Air Base, Okinawa and was also attached to the FEAF. MGEN Emmett “Rosie” O’Donnell Jr was in command to direct the bombing efforts. To be continued. . . .

The first six months of the Korean War saw the most significant movement of forces, with the North’s push down to Pusan and the South’s push to the Yalu River. During these first months Strategic Air Command established its presence with bombers, reconnaissance, and fighters. On 13 July 1950 fifty B-29s of the 19th, 22nd, and 92nd Bomb Groups launched the first bombing mission. The target was Wonsan, North Korea, a vital port for the norths war efforts. GEN Douglas MacArthur wanted more bombers and received the 98th and 307th Bomb Groups, each conducting bombing missions just one week after leaving their home bases in the United States. By September the FEAF concluded all strategic bombing missions were complete, hitting all important airfields, ports, and important targets. In addition to the bombers SAC supplied escort fighters, 75 Republic F-84Es of the 27th Fighter Wing out of Bergstrom AFB, TX. The 31st Strategic Reconnaissance Squadron, which was on TDY at Kadena AB, Okinawa at the time was replaced by the 91st Strategic Reconnaissance Squadron from Barksdale AFB, LA in mid-November 1950. 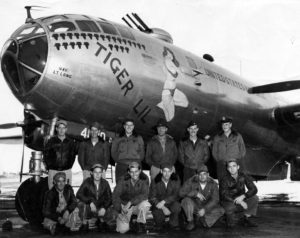 The year 1950 witnessed many changes to Strategic Air Command; entry into the Korean War with bombing, reconnaissance, and fighter escort roles, the introduction of an improved aerial refueling method and a new all jet reconnaissance aircraft. But one change impacted all members of SAC, a new uniform. On 1 September the USAF introduced the change from the old Army-green USAAF uniform to a blue wool type. The new design removed the belt, changed to a blue color, and changed the brown stripe around the cuff to black. This new style lasted for 16-years until an updated was rendered. 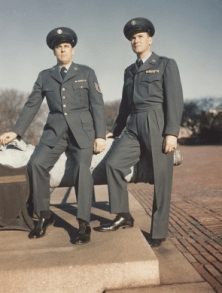