The SAC insignia; the blue sky representing Air Force operations, the arm and amour being the symbol of strength, power, and loyalty. The olive branch being a symbol of peace with the lightning flashes representing speed and power; all these were the qualities that drove SAC missions. SAC existed for four years before the insignia was adopted. Coming from a competition judged by LGEN LeMay, BGEN Power, and BGEN Kissner, Staff Sergeant Robert Barnes’s design was chosen over 59 other entries and made official on 4 January 1952, thus creating the symbol to be recognized around the world. 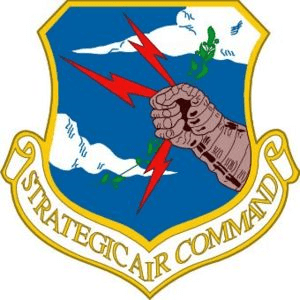 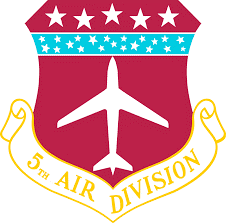 With the Cold War intensifying, both sides knew the importance of reconnaissance but also the risk of being caught. Working with the RAF of the United Kingdom, the United States loaned several RB-45C all jet reconnaissance aircraft to the RAF and trained their crews to operate. In the spring of 1952 and with the guidance of SACs 91st Strategic Reconnaissance Squadron, three RB-45s painted in RAF markings took off from England and made a deep penetration flight into Russia. The Soviet air defenses sprang into action which provided the RB-45 flight crews with the intelligence they wanted. Another flight was scheduled for later that year but cancelled as tensions built between the US and USSR.

During the hot three years (1950-1953) of the Korean War more was at stake than the forced unification or division of the two Koreas. The potential existed for escalation between the United States and China or even an all out World War involving atomic weapons. SAC maintained a strong presence in the conflict by completing 21,328 combat sorties including 1,995 reconnaissance missions, 797 psychological warfare missions, and ultimately dropping 167,000 tons of bombs. After a negotiated armistice was established and both sides settled at the 38th parallel, SAC would continue to demonstrate resolve to keep peace. In August and September of 1952 SACs 92nd Bomb Wing flew its mass of B-36 Peacemaker bombers to base in Japan, Okinawa, and Guam; demonstrating the reach of SAC. 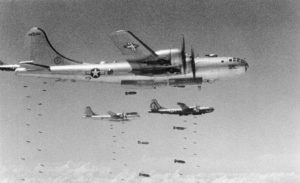 In another demonstration of SAC’s ability was Operation Longstride, conducted in August 1953 this exercise showed SAC’s ability to get fighter escorts to forward bases. The 31st and 508th Strategic Fighter Wings, flying F-84G Thunderjets, departed Turner AFB, GA on 20 August 1953. The 31st headed southeast towards North Africa while the 508th took a northeast route to England. The fighters were supported with inflight-refuelings by KC-97s and KB-29s. The flight to Africa took over 10-hours and the flight England to over 11-hours with both demonstrating the ability of SAC fighters to escort bombers the entire trip across the Atlantic. 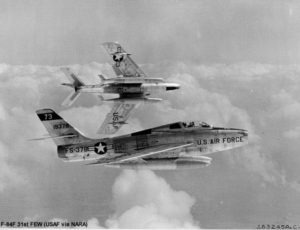