The first Boeing B-47 Stratojet was accepted by Strategic Air Command on 23 October 1951. With its sleek body, swept back wings six turbojet engines, it was the height of engineering and innovation. With the support of the Boeing KC-97 Stratofrieghter, SAC’s reach was global. In an unintentional feat, COL David Burchinal set a jet aircraft distance and endurance record. He departed Sidi Slimane, French Morocco on 17 November 1954, heading north for Fairford RAF Station, England. Due to bad weather COL Burchinal could land in England and headed back to French Morocco only to find bad weather deterring his landing there. With the help of nine inflight-re-fuelings he managed to stay in the air until the weather cleared and he could land at Fairford. His predicament resulted in him flying 21,163 miles and staying aloft for 47-hours 35-minutes. 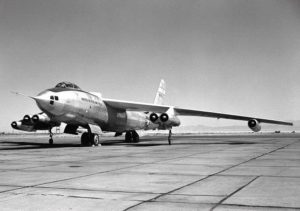 In the mid-1950s, when the Red Scare was near it’s pinnacle, Hollywood looked for a hero and found one in Strategic Air Command. With its mission of deterrence against the “Communist Threat”, SAC was a beacon of security to the nation and much of the world. On 25 March 1955, Paramount Pictured released the film “Strategic Air Command” starring Jimmy Stewart, June Alyson, and Frank Lovejoy among many others. Filmed with cooperation of USAF and at several SAC bases, the story was partially based on the career of BGEN Clifford Shoeffler who, like Stewarts character, had survived a B-36 aortic crash. The premier of the film was held in Omaha, NE (which is just north of SAC Headquarters) with a full Hollywood extravaganza held at the Storz Mansion in Omaha attended by stars of the film and GEN Curtis LeMay.

By the middle of the 1950s Strategic Air Command was demonstrating its flexibility and mobility through rotational deployments of entire combat wings, refueling squadrons and various other smaller units to various overseas bases for periods of a few days to months. Entire KC-97 squadrons were being based; on a rotational basis: in strategic positions as Goose Air Base, Labrador, Harmon AFB, Newfoundland, and Thule Air Base, Greenland to support the large flights of B-47s and F-84s across the Atlantic. At the same time Convair B-36 Peacemakers were being deployed to French Morocco and adding to the SAC arsenal, the 93rd Bomb Wing at Castle AFB, CA received the first Boeing B-52 Stratofortress arrived on 29 June 1955. This aircraft, s/n – 52-8711, can be seen at the Strategic Air Command & Aerospace Museum. 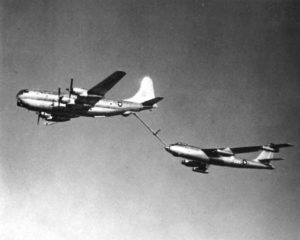 Though the SAC Bombing Competition began back in 1948 under GEN Kenney other aspects of SAC were added over the years. It was not until 1956 when SAC held its first (and only) fighter competition. Nicknamed Operation Left Hook the competition hosted five strategic fighter wings each contributing 36 F-84s. The competition, held at Offutt AFB, NE, ran from 25 October to 14 November with the 2nd Air Force’s 506th Strategic Fighter Wing receiving the newly established Auton Trophy as winner. The Auton Trophy was to be a rotating trophy similar to the MacKay Trophy or Cullen Trophy but SAC disbanded it fighter wings in 1957. 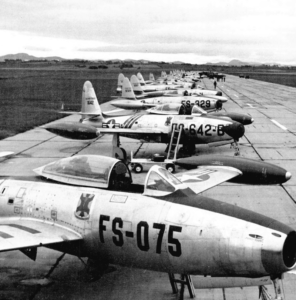 By 1957 Strategic Air Command was seeing some changes. Of course the most dynamic change was GEN LeMay being named as USAF Deputy Chief of Staff with GEN Thomas Power replacing LeMay as Commander-in-Chief Strategic Air Command. With the Soviet Union showing improvement in the development of ballistic missiles, SAC experimented with a one-third alert status. This concept kept one-third of SAC bomber force and tankers loaded and ready to go at a moment’s notice. Once the concept proved viable it was applied across SAC bases thud reducing some of the TDY assignments. SAC also received its first Boeing KC-135 Stratotanker; replacement to the aging KC-97; and its first Lockheed U-2 Dragon Lady. During Operation POWER FLIGHT, three B-52Bs of the 93rd Bomb Wing completed a non-stop round-the-world flight covering 24,325-miles in 45-hours 19-minutes. With the lead B-52 nicknamed Lucky Lady III, they completed the flight in less than one-half the time as the B-50 Lucky Lady II. GEN LeMay was on hand at the end of the flight and presented the crews with the Distinguished Flying Cross and the 93rd Bomb Wing was awarded the MacKay Trophy for the most outstanding flight of 1957. 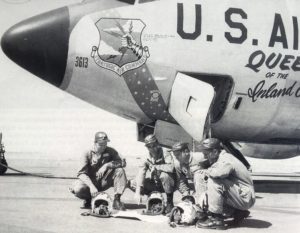