In another demonstration of SACs broad reach, GEN LeMay; then Vice Chief of Staff USAF; flew a KC-135 on a record non-stop, non-refueled flight from Westover AFB, MA to Buenos Aires, Argentina covering 6,322.85 miles in 13-hours 2-minutes on the 11th and 12th of November. Around the same time a B-52 flew from Homestead AFB, FL to Buenos Aires and back to Plattsburgh AFB, NY with the aid of three re-fuelings covering 10,600 miles. 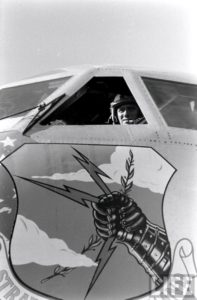 In late 1957 SAC held a reenlistment campaign with a 50-ft tall Christmas tree in front of the SAC Headquarters building at Offutt AFB. The theme of the campaign was “Maintaining Peace is Our Profession”. A sign was to be placed next to the tree but there was not enough room for the entire message. Colonel Edward Martin and Chief Warrant Officer Ben Kohot made the decision to eliminate the word maintaining. Colonel Charles Van Vliet out of Westover AFB, MA saw the sign while visiting Offutt AFB and too the idea back and soon a large sign with “Peace is Our Profession” were placed at the main gate of Westover AFB. And thus became the slogan for SAC. 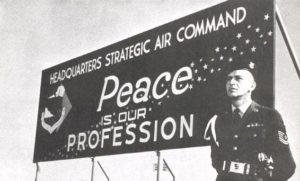 Warner Bros. followed somewhat in the steps of Paramount Pictures by using Strategic Air Command as the inspiration and focus of a feature film. The film “Bombers B-52” tells the story of a well respected and skilled master sergeant who is thinking of not re-enlisting so he can take a better paying civilian job. Starring Karl Molden, Natalie Wood, and Efrem Zimbalist Jr. With full cooperation of the USAF, the film was shot on location at Caste AFB and March AFB, CA. Natalie Wood was voted “Sweetheart of Castle AFB.” 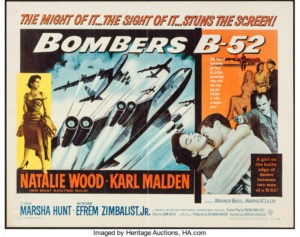 A calm cook head is always good when flying a high performance all-jet bomber like the B-47. LT James Obenauf demonstrated those traits and much more during a training flight on 28 April 1958. Flying as co-pilot with a crew of three plus a navigation-instructor, their aircraft experienced an engine explosion about 3-hours from Dyess AFB, TX; the origin of their mission. The aircraft commander gave the correct order for crew bail out. Both aircraft commander and navigator successfully egressed the jet. After LT Obenauf’s ejection seat failed he began to progress to an escape hatch. It was here when he noticed the navigation-instructor, Major Joseph Maxwell, was unconscious and unresponsive. With nerves of steel, Obeneauf returned to his back seat position and took control of the crippled aircraft, piloting it back to Dyess AFB and making a successful landing, saving the life of Maxwell. For his heroics, Obenauf received the Cheney Ward and Distinguished Flying Cross. 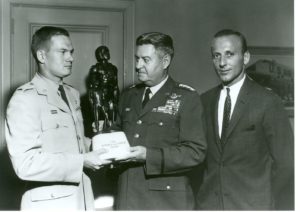 Following the end of the Suez Crisis of 1956 there was a more pronounced distrust of the United States by Arab countries and a rise in Soviet support and influence in the area. After more intense uprisings in his country, President Chamoun of Lebanon; fearing the Soviet Union invasion, requested military assistance from the United States. President Eisenhower ordered air, land, and naval forces to the area and ordered SAC to place its bombers on alert (Operation Blue Bat). Within hours SAC had 1,100 aircraft on full alert status. This show of force reassured President Chamoun and kept the peace in the region for the time being. 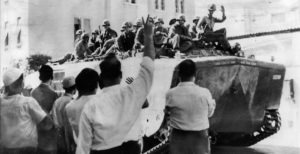