With the ever increasing tensions and threat of nuclear war, CINCSAC GEN Thomas Power had begun airborne alert operations for SAC bombers. Code names like Head Start, Hard Head, and Chrome Dome were used for B-52 missions that included flights near Soviet airspace as a deterrent to a Soviet first strike. The B-52 missions incorporated flights around Thule Air Base, Greenland to ensure its continued monitoring early warning systems to a Soviet ballistic missile launch. Unbeknownst to most civilians, the B-52s were carrying live nuclear bombs. The program called for up to 8 B-52s to be in the air at all times. The Chrome Dome airborne alert program ran from approximately 1960 to 1968 when Secretary of Defense Robert McNamara began pushing for its cancellation. 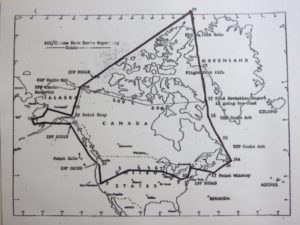 In November 1961 Headquarters USAF designated SAC as the single manager of the Boeing KC-135 Straotanker fleet. SAC would manage 640 aircraft divided to 32 squadrons and oversee all air refueling operations and provide direct support of Tactical Air Command fighter operations. SAC had demonstrated it air refueling capabilities dating back to 1958 when they set several records with the KC-135 including weight lifting record, distance in straight line with our refueling, and closed circuit records. This was all in addition to their support to SAC operations that resulted in many other awards. Without SAC’s excellence in refueling support its bombers, cargo, and reconnaissance aircraft could not reach the great achievements they did. 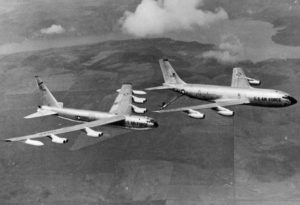 BMEWS (Ballistic Missile Early Warning System) became operational at Thule Air Base, Greenland on 1 February 1961. This system tied to two others; Clear, Alaska and Fylingdales, United Kingdom; provided an early warning system of a Soviet Union ballistic missile launch. Operated by NORAD (North American Air Defense Command) would provide SAC with sufficient warning of a first strike to get its bombers into the air and prepare our own missiles for a retaliatory strike. 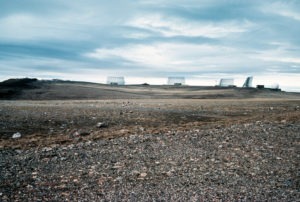 Radar Bomb Scoring (RBS) provides fairly accurate means to train crews on unguided bomb drops without having to actually drop ordinance. Strategic Air Command utilized this equipment early on to test and train all of their bomb crews. Thirteen fixed sites were established for SAC but over time the crews became too familiar with the targets, scoring hits too easily. In 1961 SAC developed the RBS Express railcars which could be moved to many other ranges throughout the United States. The staff of the RBS cars relied on base billeting and messing for support. The following year the RBS Long Train was introduced which added billeting and messing to the train expanding the options to conduct bomb training. 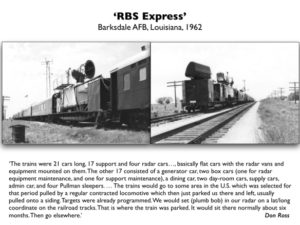 Sec. of Defense McNamara had predicted that with BMEWS and the growing ballistic missile force and the Soviet missile force that the need or usefulness of a manned bomber force would be greatly reduced. McNamara proved to be tenacious in promoting missile; both ballistic and tactical; at the expense of canceling bomber programs. The B-1 Lancer was initially one victim of his opinion though the program resurfaced under President Regan. In 2021 we honor the 66th Anniversary of the introduction of the B-52, sharing the skies with the B-1B and B-2. United States Air Force Chief of Staff General Curtis LeMay with United States Secretary of Defense Robert McNamara at the Pentagon on April 10, 1963. During World War II McNamara served under LeMay’s command as a statistician for the Army Air Forces. 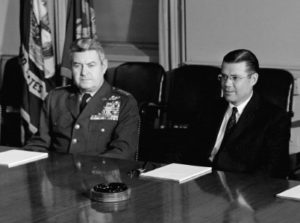