SAC was tapped to assist with photo reconnaissance over Alaska following an intense earthquake. On Good Friday, March 27, 1964, south-central Alaska experienced a 9.2 earthquake and SAC was asked to help with damage assessment. Two B-58s of the 43rd Bomb Wing were dispatched from Carswell AFB, TX. Within 14.5 hours the two B-58s had completed the low-level photo mission and the 5,751-mile round trip. Three U-2s and two B-57s were dispatched for high-altitude photo reconnaissance. Two more B-58s were dispatched the next day for another low-level pass. 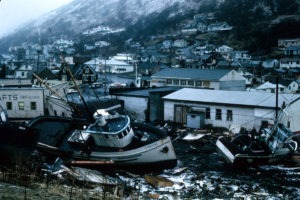 The turmoil and strife of Vietnam had confounded and defeated the French following World War II. By the 1950s the United States began to participate in the quandary with advisors and then trainers. By 1964 the US military was engaged in another heated conflict of the Cold War, pitting communist tyranny against capitalist invaders. Tanker aircraft crews, Boeing KC-135 Stratotankers, were some of the first Strategic Air Command warriors employed in the conflict. On 9 June 1964, SAC tankers were first used in support of combat operations. The tankers and crews, always vital to the SAC mission, were involved extensively throughout the war especially during such operations as Arc Light, Rolling Thunder, Linebacker I & II, and Young Tigers. 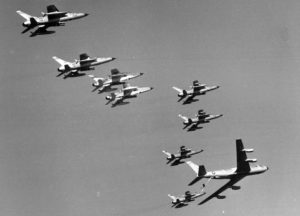 Prior to Francis Gary Powers being shot down in 1960, the CIA and Lockheed’s special programs Skunk Works division were working on the replacement to the U-2. Operation Oxcart begun in 1957. The astounding mind of Skunk Works director Kelly Johnson the A-12 was born. The A-12 would serve in Vietnam as a reconnaissance platform and spawn other fascinating aircraft as the YF-12 and the infamous SR-71. Strategic Air Command would ultimately take over operations of the SR-71 Blackbird as tool to keep tabs not just on Soviet Union and China activities but utilized in many armed conflicts throughout the Cold War as well as natural disaster survey and nuclear development surveillances. 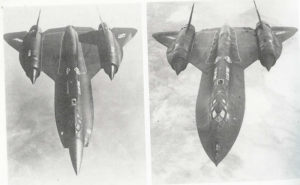 The 1967 MacKay Trophy was awarded to the MAJ John Casteel and his crew of a SAC KC-135 Stratotanker, 902nd Air Refueling Squadron. During what was supposed to be a routine refueling operation of two Lockheed F-14 Starfighters turned into an acrobatic spectacle that saved six aircraft at the risk of his own crew. Two US Navy Vought F-8 Crusaders (fighters) and two McDonnell-Douglas F-4 Phantoms were starved for fuel and the two responding Navy KA-3 Skywarrior (tanker) were in danger of running out of their own fuel before they could top off the fights. MAJ Casteel used his KC-135 to refuel both KA-3s while they were refueling the F-8s and F-4s; dubbed a triple fueling. 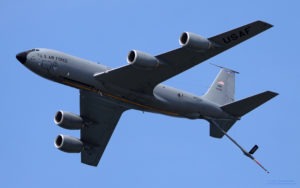 Allow me to jump back a bit, I have been out line. Not in a nefarious way but skipping ahead to the MacKay Trophy I skipped over Operation Arc Light and some other SAC events. On June 18, 1965, SAC B-52 bombers set off on the first Arc Light mission. These were largely B-52 missions staged out of Anderson AFB, Guam with refueling from KC-135 tankers. This first mission involved 27 B-52Fs separated into cell of 3 aircraft each flying in an arrowhead formation. Some view the first mission as a failure because they did not take many if any Viet Cong and two B-52s were lost in a mid-air collision. One obstacle was hitting a mobile force using the jungle canopy as cover. The benefit of using the B-52s were not being seen or heard by forces on the ground until the bombs hit. 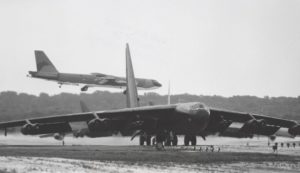