Following conflicts between the east and west over Berlin, the Soviet Union cut access into West Berlin. In late June SAC ordered a 301st , Bomb Group squadron equipped with B-29s to remain in Germany where they had been training and moved the two other B-29 squadrons of the 301st to Goose Bay AB, Labrador. SAC’s 28th and 307th Bomb Groups were placed on less than 12-hour alert with the rest of SAC placed on 24-hour alert. All this action was in anticipation of defending West Berlin and West Germany from a communist invasion. The invasion did not come and the allies instituted an air lift to keep the city alive and free.

When Strategic Air Command was created at the controller of atomic weapons it not only inherited bombers, reconnaissance, and other support aircraft, it also inherited escort fighters. Initially SAC had squadrons of P-47s and P-51s but through the next 10 years they acquired some of the more modern fighters of the time, P-80 Shooting Star, F-86 Sabre, and the F-84 Thunderjets. SAC would maintain fighter groups from its creation to 1956 when they would be moved to Tactical Air Command. 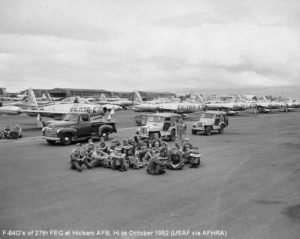 The role of fighters with Strategic Air Command provided both escort protection and reconnaissance, the challenge being missions were across the Atlantic and SAC was not yet occupying bases in Europe for fighters. In July 1948 COL Schilling of the 58th Fighter Group led 16 F-80 Shooting Stars on a mission across the Atlantic. Designated Fox Able One (Fighters Atlantic Operation 1) the flight made several landing along route; Maine, Labrador, Greenland, and Iceland. The entire trip took 10 days but set a new mark for transporting fighters across the ocean via air.

Despite some difficulties in the first couple of years, Strategic Air Command under GEN Kenney did some giant steps forward in building long range heavy bomber force. The follo-on to the WWII heavy B-29 was the B-50. First introduced to SAC 20 February 1948, the new Superfortress flew 7,000’ higher, 40 mph faster and carried 6,000 lbs more bombs. Four months later the first B-36 was delivered that dwarfed even the new B-50. At that same time the first air refueling squadrons were being organized and equipped with KB-29s extending the range of the B-50s. 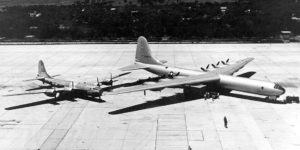 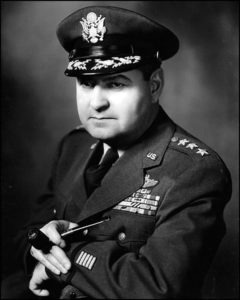