SAC participated in several bombing operations during the Vietnam War but not over North Vietnam’s capital Hanoi. In early 1972 President Nixon eliminated that restriction and authorized Hanoi as a target as part of Operation Bullet Shot. The first sorties began 8 February 1972 based out of Anderson AFB, Guam. The surge of forces and 24-hour battle rhythm of maintenance, refueling, engine run-ups, and rearming created so much noise that service members could not sleep on their off-time. Many of the maintenance personnel would catch a ride on tankers leaving for combat missions just to get some sleep. The Soviets kept a close eye on flights in and out of Anderson AFB by placing a trawler (dubbed the skunk boat) just inside international waters off the end of the runway. They would pass the numbers and types of aircraft north to Hanoi. By 15 April 1972, SAC was flying 75 sorties a day (2,250 a month) out of Guam. Operation Bullet Shot was halted when it appeared the Paris Peace talks were beginning to move in a positive direction. 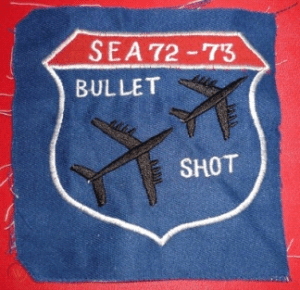 As Operation Bullet Shot was delivering heavy bombardment to the Hanoi and Haiphong area other operations involving SAC were focusing on the supply routes to the west of Vietnam. Operation Freedom Train began in early 2 April 1972 and blended into Operation Linebacker through later October. SAC B-52s targets underground fuel storage areas as well as supply route with the help of US Navy and Marine aircraft. SAC B-52s were also utilized for “psyop” (psychological operations) missions. With the objective of disheartening the North Vietnamese war effort, aircraft were loaded with propaganda leaflets, North Vietnamese currency, and small transistor radios. The radios were preset to receive VOICE of AMERICA broadcast. The currency was intended to cause inflation and ultimately devalue the currency and hurt the north’s ability to finance offensives. SAC’s B-52 was assisted with pamphlet dropping drones from the 100th Strategic Reconnaissance Wing. A total of 660,649,000 leaflets were dropped by all delivery systems.

Following Operations Bullet Shot, Linebacker and several other bomber operations designed to persuade the North Vietnamese government to move forward with peace talks, another operation was planned after the North Vietnamese once again pulled away from the talks. Linebacker II was planned by SAC at the highest levels at Offutt AFB, NE. Targeting Hanoi and Haiphon again the B-52s encountered what has been described as the most heavily anti-aircraft defenses in the world. One crew member was believed to have said you could have walked from Hanoi to the coast on all the SAM (surface to air missiles) in the sky. From 18 to 29 December (with a 24-hr pause over Christmas) the 700+ B-52 sorties dropped over 15,000-tons of bombs on the 24 designated targets (supported by 1,300 KC-135 tanker sorties). This operation did come at a cost with 15 B-52s shot down. The result of the operations was the North Vietnamese returning to the peace talks. 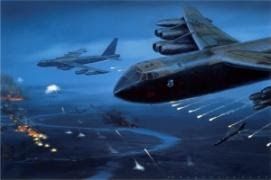 With the North Vietnamese back at the peace talks SAC bombing missions over the north on January 15, 1973 with an agreement to end the war signed on January 27, 1973. On that same day SAC completed its last bombing mission in Vietnam with a mission supporting South Vietnam forces in the south. SAC B-52s would continue missions over supply routes in Laos and Cambodia until August 15, 1973. This date marks the end of SACs bombing missions in southeast Asia, Eight years of combat for SAC. The Daedalion Trophy was awarded to SAC that year for the most effective aircraft accident prevention program as well as the Cullen Trophy being warded to SACs 6th Strategic Wing for contributing the msot significant photo reconnaissance and signal intelligence to Strategic Air Command. 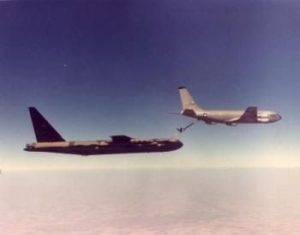 While SAC bombers and tankers were pounding the North Vietname it still maintained its deterrence mission. From 1965 through 1973 SAC B-52s and the EC-135 were flying alert missions with the rest of the SAC fleet at the ready. In 1965 SAC maintained a ballistic missile force that included the Titan II and Minuteman supplemented with the airborne Hounddog missile. On February 24, 1966 the 341st Strategic Missile Wing launched two Minuteman A missiles proving multi-countdown techniques viable. The following year SAC would host its first Missile Competition. By June 19, 1970 SAC was accepting its first Minuteman III missiles followed by its first operational launch of the new missile on March 24 for the following year. 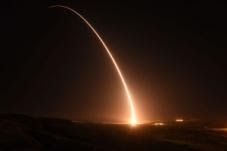