With the ending of SAC operations in Southeast Asia one would think SAC could resume full attention toward nuclear deterrence. Looking back to 1970 and the three-day skirmish between Israel and Egypt tensions had continued and strained. On October 6, 1973 (beginning of Yom Kippur and Ramadan). Egypt and its allies launched a surprise attack on Israel. This event pushed the possibility of escalation to all out nuclear war as the US was a strong ally of Israel and the USSR supported Syria and Egypt. As both super powers provided extensive munition and equipment support, neither committed its own combat forces. SACs 9th Strategic Reconnaissance Wingdid fly (Operation Giant Reach) sorties from October 13, 1973 to April 4, 1974. These nine sorties were staged out of Griffiss AFB, NY and Seymour Johnson AFB, NC as Great Britain declined to allow the U-2s to land at Mildenhall AB, England. Fortunately, the US and USSR did not come to blows and the conflict was ended through United Nations agreement though the Arab oil producing nations did retaliate by dramatically raising the price of oil impacting manufacturing in Europe and US while contributing to massive inflation. 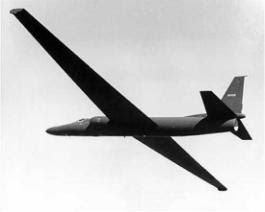 The SAC Bombing / Navigation Competitions had been happening with some interruptions, since 1947 with proven skill improvements. Congressman Les Aspin (D-WI) held different views and voiced them in 1974 when he called for the cancellation of the competition. Congressman Aspin cited that the competition detracted from SAC overall readiness, too many needless frills, and too expensive. Though all of these stated issues were unfounded, GEN Dougherty did cancel the 1975 competition, but replaced it with an exercise, Operation High Noon. Designed to test SACs ability to a short notice contingency operation. TAC F-111s and RAF Avro Vulcans were also invited to the exercise. The bombing and missile competitions would resume in 1976. 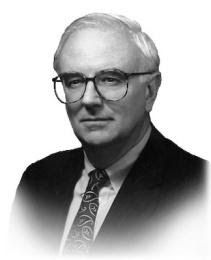 Captain James A Yule, a 4018th Combat Crew Training Squadron instructor out of Carswell AFB, TX. distinguished himself by gallantry and unusual presence of mind while participating in an aerial flight of a B-52D aircraft on 19 May 1976. Captain Yule’s flight developed a unique multiple emergency and he assumed command of the aircraft, and at great personal risk, checked out the hydraulic open wheel well area to detect the problem. Using initiative, he coordinated with ground agencies and crew members and determined that a safe landing could be made after loss of braking and complete failure of steering. Captain Yule’s professional competence and outstanding airmanship under extreme stress resulted in successful recovery of the crew and a valuable aircraft. He was awarded the 1976 MacKay Trophy for his courageous acts in landing a malfunctioning aircraft. 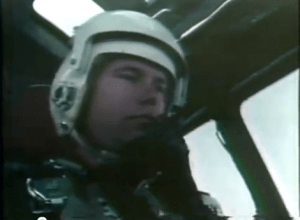 Jumping back a couple years we visit a very significant event in missile and deterrence history. Exercise GIANT PACE 74-1 occurred on February 1, 1974 at Ellsworth AFB, South Dakota. The 44th Strategic Missile Wing, Minuteman II ICBMs, coordinated their ground-based Launch Control Centers (LLC) with the Airborne Launch Control System (ALCS) aboard an EC-135 Looking Glass airborne command post. This event marked the first ever Simulated Electronic Launch-Minuteman (SLEM). This exercise proved that ICBMs could be launched from the Looking Glass. This capability was just one more guarantee that the U.S. was capable of launch a response to any nuclear strike by the USSR. 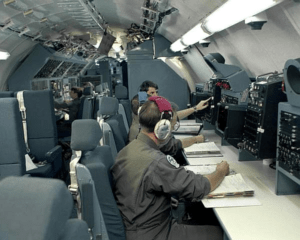 Later in 1974, September 6, Headquarters USAF gave authorizations for an upgrade to the Launch Control Center’s (LCC) Launch Control Panel. The USAF Logistics Command would oversee the upgrade dubbed Project Rivet Save. The project incorporated circuitry changes that would eliminate the possibility of an unauthorized launch by a single crewmember. As directed by USAFHQ SAC could reduce both the number of crew members needed and duration of alert duty from 48-hours to 24-hours. All of this would save USAF $14-million per year. Logistics Command was able to meet the deadline of March 31, 1978 for the upgrades. 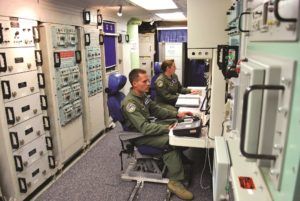