Celebrating Christmas, Hanukkah, or Kwanzaa in a combat zone offers a different perspective of the holidays. For most service members who face hostile fire nearly every day, the winter holiday season can go by almost unnoticed as there is no break in constant vigilance, defense, or patrols. It can also hold for those serving on alert or guard duty during the Cold War. Though you may have served just a few miles from family, many SAC warriors worked underground in a missile silo, high in the air aboard Looking Glass, or sequestered inside an alert facility awaiting the cheery sound of the klaxon. It may seem a far cry from bullets or mortars ringing in the holiday but standing guard against nuclear war every day will wear the soul down.

Let me present some brighter stories of peace during wartimes. Over the next several days we will share stories from the Department of Defense and veterans accounts when a truce, sometimes very brief, is declared and our weary service members have a chance to observe the true meaning of the season. Enjoy, and if these stories stir memories of your winter holiday while serving, please jot them down and send them to the museum. I would love to collect these memories for future generations to understand the sacrifices made protecting our freedom.

1776: Washington’s Famous Crossing of the Delaware 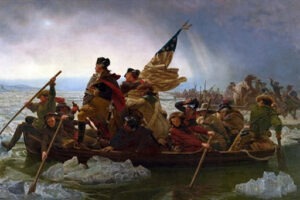 The winter of 1776 didn’t start as a good one for Gen. George Washington’s Continental Army. They suffered many defeats in the first few months of the American Revolution and had been pushed out of New York and New Jersey into Pennsylvania. For the troops, morale was low.

Washington needed to renew faith in the battle for independence, so he decided to surprise the Hessians — German troops hired by the British — who were stationed in Trenton, New Jersey. He figured that doing so after the enemy’s Christmas celebrations would find them groggy and unprepared for a fight, especially as a terrible winter storm was brewing.

So late Christmas night, Washington and his troops hopped in boats and waded across the icy Delaware River to test his theory — and he was right. At dawn on Dec. 26, about 2,400 frozen Continentals pushed into Trenton, and they did indeed surprise the enemy, who surrendered within an hour and a half.

The mission, which became known as the Battle of Trenton, was of huge significance to the Continental Army’s cause. Not only did it raise the troops’ spirits, but it revived the hope of the colonists, who were beginning to think their battle for independence wasn’t feasible.