1864: The First Battle of Fort Fisher 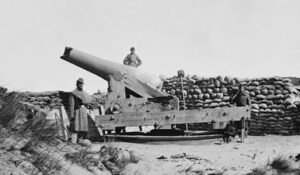 For most of the Civil War, North Carolina’s Fort Fisher saw very little combat. But that changed on Christmas 1864, when the Union decided it wanted to capture the last port the Confederates held on the Atlantic Ocean.

It was a debacle for the Union.

First, the Union tried to pack a warship with explosives and blow up the fort’s walls — but that didn’t work. It just blew up their ship and alerted the Confederates of an imminent attack. So on Christmas Eve, the Union tried again, bombarding the fort with heavy gunfire, most of which fell short or missed its target.

On Christmas morning, Union commanders decided to shell an area north of the fort so troops could land and come ashore. But when they did, more disappointment followed — the fort’s heavy artillery was completely unscathed, so that was a no-go, too. It was only then that the Union ordered troops to retreat.

While the first Battle of Fort Fisher was a massive failure for the Union, the second wasn’t. In mid-January 1865, Union troops were finally able to capture the fort, effectively cutting the Confederates off from global trade and supplies. The Civil War ended three months later.