1896: “Stars and Stripes Forever” is Written 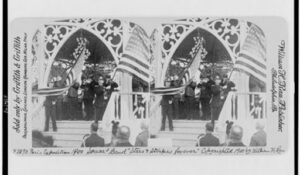 While this wasn’t exactly a military action, it’s definitely a symbol of America’s military might.

John Philip Sousa, who grew up during the Civil War, was a talented musician who became a long-time director of the U.S. Marine Band. Known as the “March King,” he was a rock star of his time, eventually starting his own band in 1892.

On Christmas Day 1896, while crossing the Atlantic on his way home from a European vacation, Sousa’s lasting legacy came to him. He said the notes for “Stars and Stripes Forever” were born out of homesickness and fond memories of his time as the Marine Band’s leader.

So this holiday season, while you’re enjoying leave, family, friends and feasts, think of some of your fellow troops, past and present, who had to forgo their holidays for the greater good of the country.  While you’re at it, you might even want to put on “Stars and Stripes Forever” in their honor.