A Christmas Story from World War II Comes Back to Life 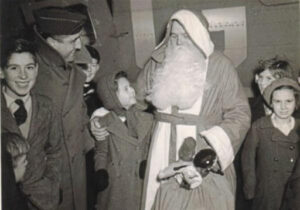 There was little to celebrate for children in England during World War II. But Christmas Eve 1943 remains a Christmas to remember for those near the U.S. Army Air Force Base at Molesworth in southern England.

Every December, the men and women of the Eighth Air Force, 303rd Bombardment Group would hold a Christmas party for youngsters in nearby villages.

The parties weren’t just perfunctory affairs with tinsel and a GI in a Santa suit. They were considered quite fancy in those times of severe rationing and little merriment in war-torn England. But the party thrown in 1943 by the 303rd, which flew B-17 bombers called “Flying Fortress”  on perilous day-time missions into Nazi Germany, was the most  elaborate.

It included one of those B-17s, spewing red and green flares and carrying Father Christmas as he is called in England, with lots of toys and treats.

Lt. Col. Harry Gobrecht, who kept a day-to-day account of the 303rd in England recorded the events of the Christmas Eve party in 1943 that may have set the record for festivities.

After the war, Col.  Gobrecht, self-published a history based on his diary, ”Might in Flight: Daily Diary of the Eighth Air Force’s Hell’s Angels, 303rd Bombardment Group.  There is a copy  of the late California man’s book in the library at Soldiers & Sailors Museum and Hall in Oakland.

Curator Michael Kraus said the diary was donated in 1997 by Eddie Deerfield who was a radio operator on a B-17 and who has received numerous medals for heroism. Mr. Deerfield now lives in Florida and made the donation when he was in Pittsburgh for a reunion of the 303rd.

Most of Col. Gobrecht’s daily accounts pertain to missions, tactics, formations, planes and crews. But when it comes to the 1943 Christmas party, it’s hard to tell who had more fun, the children or the servicemen.

“A lone Flying Fortress circled for a landing at Molesworth, wildly shooting red and green flares, while 200 British children between ages of five and 14 gazed with awe and anticipation on their faces,” he wrote.

Just as for a war mission, before the bomber took to the air precision planning was needed. The airmen bought out all the toys and treats at the base PX, as well as what little they could find in village shops. Base cooks baked trays of cookies and cakes. Lt. Wightman A. Roach, who Col. Gobrecht writes “liked kids and was perfect’ for the part,’’ was enlisted to play Father Christmas — as Santa is called in England.

Then with the planning complete, it was time to launch Christmas mission 1943.

“Early in the afternoon of 24 December, kids gathered from the local schools and churches …were sweating out the arrival of Father Christmas, who was aboard the American bomber dispatched to ferry him from the North Pole,” Col. Gobrecht wrote.

“As the Fort landed and taxied, it took the combined efforts of 40 soldiers to prevent kids from swarming over the ship before it stopped. But, when the door opened and the red-cloaked Father Christmas stepped out with his bag of toys, not even the Fifth Army could have held back the charge of children.’’

The children’s unbridled enthusiasm could be partly explained by the harsh rationing that was imposed in England since the war began in 1939.

Mt. Lebanon residents Hazel and Alan Cope, who both grew up in England during the war, said they remembered the shortages and rationing imposed on sugar and basic foods, such as meat and bread. She was from London and he grew up in near Birmingham in the north. They did not attend the Christmas party described in the book.

“I remembered one Saturday a bake shop had broken cookies, biscuits as we called them, and all the children rushed to the shop before they were gone. We had very little sweets. Everything was rationed.” Mr. Cope recalled.

More from the diary

In his diary, Col. Gobrecht wrote that “the kids had stuffed themselves on GI chow and laughed at Mickey Mouse in the Base theater. Old Pappy Christmas was the climax of the party, and led his young guests back to the Red Cross Aero Club via jeep. The kids queued up to get their Christmas gifts, contributed by the GIs who had scoured shops on leave and shared their own Christmas packages.

“Candy saved from PX rations, was a big hit and ice cream disappeared faster than the Red Cross girls could dish it out. The English kids probably had a lot of tummy aches that night.”

After the party, the men went to back to their real mission, smashing Hitler’s war machine in bombing raids noted for their high causality rates.

A mission to bomb an aircraft factory in Oschersleben, Germany, on Jan. 11, just a few weeks after the party resulted in the loss of 11 bombers and their 10-man crews, out of 40 planes on the mission.

The Rev. John Guest, now a minister at the Christ Church at Grove Farm in Sewickley, also grew up in England and remembers the bombs and the severe rationing.

He was not at the party described in the diary, but does recall sleeping in air raid shelters night after night in London.

Some of the missions flown by the 303rd helped to knock out the launch sites of the German “buzz bombs,” and the later, the V-2 rockets launched against England by the Nazis.

Rev. Guest, who came to the United States after WWII, explained the impact the American war effort had on him personally.

“As I older grew, following WWII, I became very grateful for the U.S.A. coming to our aid, sending young men over to do battle against Nazi Germany, and when I have the opportunity, I say  ‘Thank you, America for coming to our aid and the price that you paid in doing so. We would never have survived without you.’”