In the beginning of the Cold War strategic bombing and strategic reconnaissance faced the issue of distance to target. The United States long range bombers and reconnaissance aircraft could make the flight but would not have fighter escort. The concept of FICON (fighter conveyor) seemed to be the immediate solution.

Developed out of a request by the USAAF as an escort fighter to be carried in the bomb bay of a Northrop XB-35 or Convair B-36, the McDonnell XF-85 Goblin first flew August 25, 1948. The extended range of the large bombers and growing concerns of the Cold War called for nuclear bombers to be able to be launched from the United States, reach the Soviet Union and escape to a friendly base. Stationing escort fighters in Western Europe put bombing missions at risk. The Goblin was tested for more than a year but ultimately proved too unstable for operational use and was cancelled on October 24, 1949.

Dating back to 1944 and German test of coupling two small aircraft together, wingtip coupling was tested at Wright Field, Dayton Ohio in the late 1940s. The concept was to extend the range of a smaller escort fighter by using a larger aircraft (bomber) as the tow aircraft. Using a Douglas C-47A Skytrain and a Culver Q-14B as test vehicles, test pilot MAJ Clarence “Bud” Anderson successfully coupled the Q-14B to the C-47 on October 7, 1949. This success would lead to the MX-1018 program, code named “TIP TOW.”

Republic Aviation was awarded the contract to develop a means to couple a fighter to a bomber, thus extending the range of the fighter and protection for the bomber. Using a specifically modified Boeing ETB-29A and two Republic EF-84D, a successful hook-up was made September 15, 1950. Wing flexibility of the B-29 aircraft and wing-tip vortices were the significant concerns, but on October 20, 1950 the program made a full connection flight of 2 hours and 40 minutes.  Up to then, the fighter aircraft were manually controlled the entire time, from connection to towing to disconnection, an automatic pilot system was being developed to reduce pilot fatigue during the long flights.

On April 24, 1953, the left-side EF-84 connected to the ETB-29 and switched on newly installed automatic pilot system. Over Peconic Bay, New York, the EF-84 flipped over onto the ETB-29 wing causing both aircraft to spin out of control and crash. All members of both aircraft perished. The pilot of the EF-84 on the right-side of the bomber, MAJ “Bud” Anderson, was able to pull up and away from both aircraft.  This tragedy would end the TIP TOW Project,

Although the XF-85 project proved to be a failure, the USAF did continue to pursue the idea of a parasite fighter carried in the belly of a B-36. The concept changed a bit, use a larger fighter and switch the mission from escort fighter to attack aircraft. A production model RB-36F was modified with a new type of trapeze to receive another aircraft and was designated a GRB-36F. The attack aircraft would be F-84E which had a capture hook attached to the forward section of the aircraft. The first hook-up between aircraft occurred on January 9, 1952 with the first in-flight retrieval successfully made on April 23, 1952 and a complete mission; take-off, launch, retrieval and landing occurring on May 4, 1953.

With the introduction of the newer and faster RF-84F both the aircraft and mission changed. The original YF-84F was modified to become the RF-84K aircraft and the mission was changed from attack to reconnaissance. With the success of the FICON system 10 GRB-36F and 25 RF-84K were ordered and ultimately assigned to the 99th Strategic Reconnaissance Wing (Fairchild AFB, WA) and the 91stStrategic Reconnaissance Squadron (Larson AFB, WA) respectfully. The system saw only limited operational use and was cancelled in April 1956. Some of the issues included reduction in range and ceiling of the GRB-36F, minimal ground clearance with both aircraft mated, and in-flight retrieval; difficult for the experienced test pilot in good conditions.

In parallel to both FICON and TIP TOW, project TOM TOM was being developed using a JRB-36F and two RF-84F. Using a newly designed articulated arm and clamp system, the RF-84F was intended to attach to the JRB-36F and be towed to the target site. The JRB-36F retained most of its cameras to record flights and the RF-84F would retain four of its .50 guns for defensive action for itself and the “Mothership.” Turbulence and vortices continued to be a problem for the RF-84F pilots, with one aircraft actually being torn from the JRB-36F in-flight. The program, much like TIP TOW was cancelled.

To leave the ground, a fully laden Stratojet required the additional thrust from takeoff rockets in the rear fuselage. Early B-47s carried these rocket units internally, while later Stratojets dropped them after takeoff.

With the technology and mastery of in-flight refueling progressing well, the need for towing escort fighters quickly diminished. The development and introduction (June 1951) of the Boeing B-47 Stratojet, an all jet, swept-wing medium bomber spelled the end of what GEN Curtis LeMay termed “an interim bomber”, the B-36. The introduction of the Boeing B-52 Stratofortress in February 1955 completed the transition. Both the B-47 and the B-52 proved versatile and served well as platforms for many mission during the Cold War. 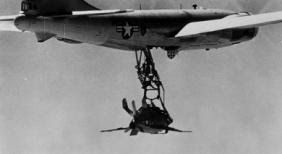 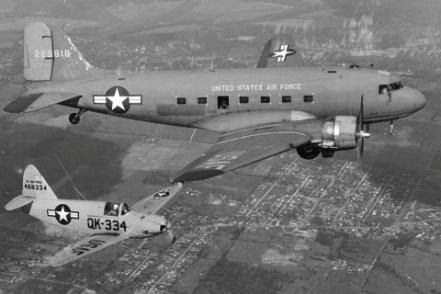 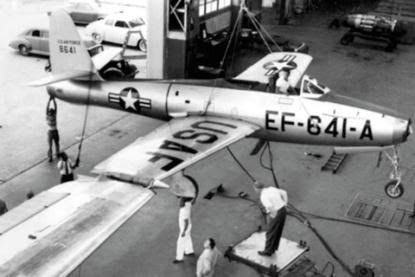 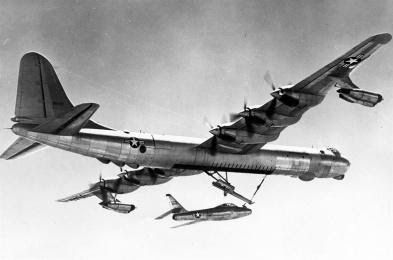 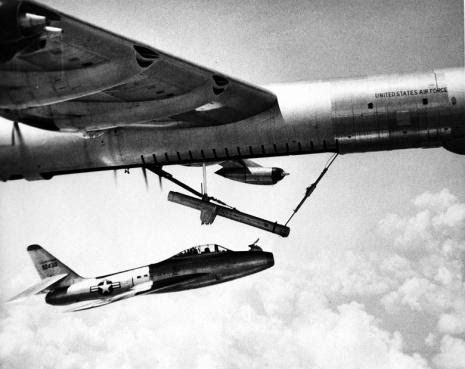 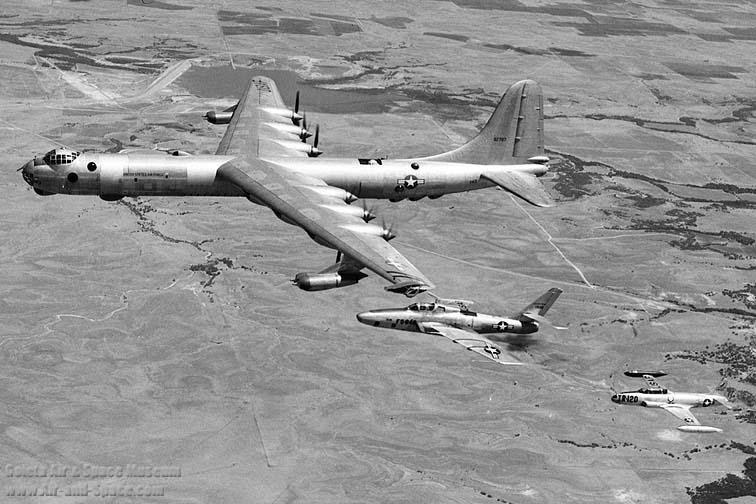 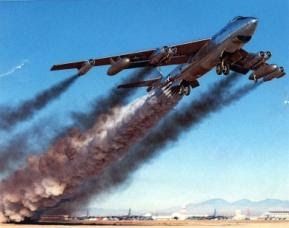 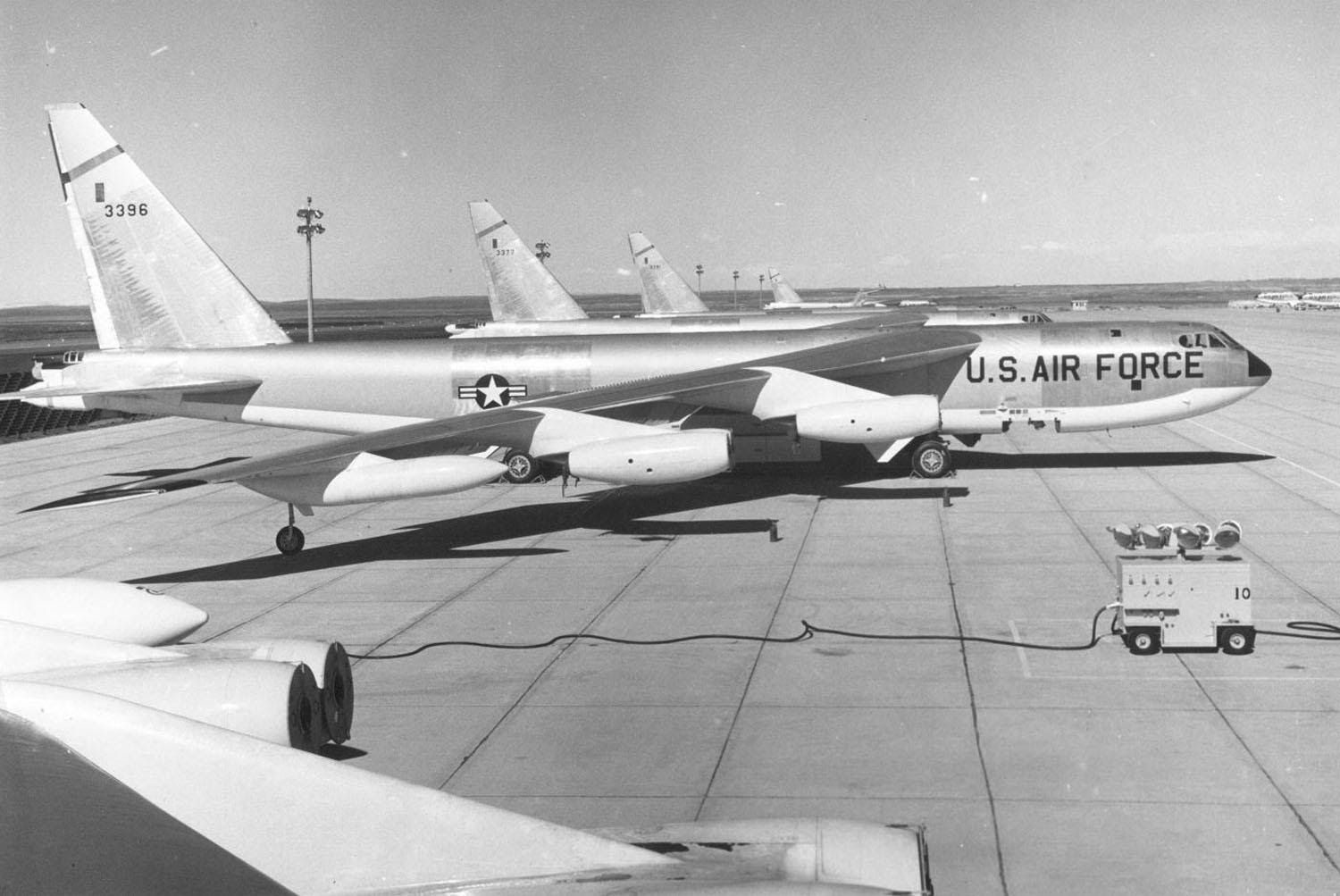