The dawn of the atomic age cannot be defined by a single event as the series of events that lead to it and those that followed play just as an important place in history as the single action.

On August 6, 1945, a B-29 “Superfortress” bomber, nicknamed Enola Gay, dropped the world’s first atomic bomb over the city of Hiroshima, Japan.  In development since 1940, the United States had been warned that Germany was researching nuclear weaponry.  The threat of a nuclear Germany passed when Germany surrendered in May 1945, leaving Japan the only Axis power left fighting.  President Harry Truman had two decisions: launch an invasion of the home islands, resulting in thousands of American casualties, or use the atomic bombs.  The five ton atomic bomb, nicknamed Little Boy, delivered a blast roughly equal to 15,000 tons of TNT and leveled four square miles of the city.  80,000 people were killed in the blast. 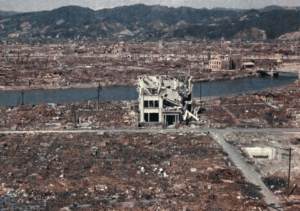 Three days later, August 9, 1945, a second B-29 “Superfortress,” Bockscar dropped the second and last atomic bomb on the city of Nagasaki, Japan.  Despite the devastation caused by the first atomic bomb, Japan still had not accepted the Allies’ demand for an unconditional surrender.  The date for the second bombing was set for August 11, but bad weather expected that day pushed the date up to the 9th.  The second atomic bomb, nicknamed Fat Man, exploded with a force equivalent of 22,000 tons of TNT.  Roughly 60,000-80,000 people were killed in the blast.

Emperor Hirohito met with his War Council shortly after the bomb’s detonation and declared, “continuing the war can only result in the annihilation of the Japanese people…”  The last emperor of Japan finally gave his permission to accept the terms of unconditional surrender. 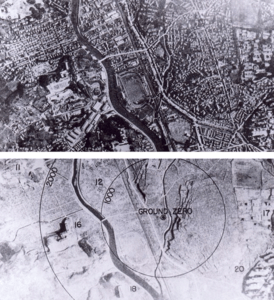 Members of Japan’s Army leadership attempted a coup on August 14, 1945 to stop Emperor Hirohito’s declaration of surrender.  Known as the “Kyujo Incident” in Japan, a battalion of rebel soldiers invaded the Imperial Palace led by army ministry officers Kenji Hatanaka and Jiro Shiizaki.  The soldiers failed to find the stenographer, who had just finished the Imperial Rescript of Surrender, and the emperor’s pre-recorded announcement which had been stored on two vinyl records and hidden under the palace.  The palace was surrounded by Japan’s Eastern Army, leaving the rebels out gunned, forcing Hatanaka and Shiizaki to surrender.  Both men were forced to march through Tokyo, giving out leaflets explaining what they had done. Just before the emperor’s broadcast, declaring surrender on August 15, both men committed suicide. 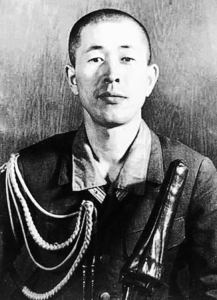 Shortly after the August 15 announcement of surrender by Emperor Hirohito, General Douglas MacArthur was appointed to head the Allied occupation of Japan.  The surrender ceremony would take place on September 2, 1945 aboard the USS Missouri.  The ceremony would have happened sooner but MacArthur pushed it back to September 2 to allow representatives of the major Allied powers to be present.

After Foreign Minister Mamoru Shigemitsu signed on behalf of the Japanese government, General Yoshijiro Umezu signed on behalf of Japan’s armed forces, as his aides wept.  The Allied Nations present at the ceremony, and who left signatures, were the United States, China, Britain, the USSR, Australia, Canada, France, the Netherlands and New Zealand.  The ceremony lasted 20 minutes, bringing an end to history’s most devastating war. 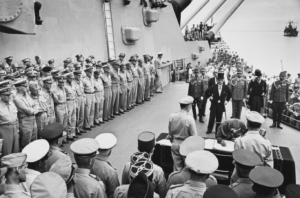