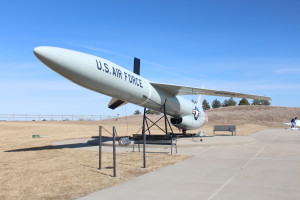 Although unofficially designated a surface-to-surface ICM, the Snark was essentially a small, turbojet-powered, unmanned aircraft.  It was designed to be fired from a short mobile launcher by means of two solid-fueled rocket boosters.  Once airborne, the Snark was powered by a single Pratt and Whitney J-57 turbojet engine capable of cruising at Mach 0.9 to an altitude of approximately 50,000 feet.  After a programmed flight of 1,500 to 5,500 nautical miles, the Snark’s airframe separated from its nose cone, and the missile’s nuclear warhead followed a ballistic trajectory to its target.  Plans developed by the Strategic Air Command employed the Snark’s against enemy defensive systems, especially radars, to ensure the effective penetration of enemy territory by manned bombers.

The Convair Division of General Dynamics produced three different models of the Atlas ICBM destined for deployment with the Strategic Air Command.  The first operational version of the Atlas, the “D” model, was a one and one-half stage, liquid-fueled, rocket-powered (360,000 pounds of thrust) ICBM equipped with radio-inertial guidance and a nuclear warhead.  It was stored horizontally on a “soft” above-ground launcher, unprotected from the effects of nuclear blast, and had an effective range of approximately 6,500 nautical miles.  The second Atlas ICBM configuration possessed all-inertial guidance, improved engines, a larger warhead, and was stored in a horizontal position in a “semi-hard” coffin-type launcher.  The Atlas F missiles also were deployed in “hard” silo-lift launchers which stored the missiles vertically in underground, blast-protected silos. 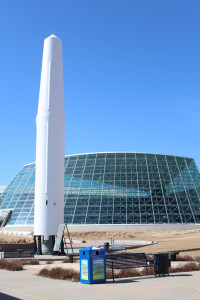 The Thor intermediate-range ballistic missile (IRBM) was the product of the early Cold War race to deploy nuclear-armed missiles before the Soviets. Thor was designed to be an interim nuclear deterrent while the U.S. Air Force developed long-range intercontinental ballistic missiles (ICBMs). The IRBM concept called for a missile with a range of about 1,500 miles that would be based in Europe. Great Britain agreed to host four IRBM bases, and Thors were operational in England from June 1959 to August 1963. Royal Air Force crews operated the missiles, but USAF personnel controlled their nuclear warheads. 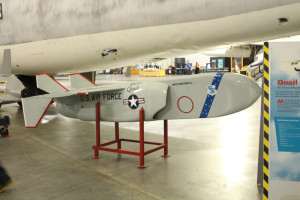 The Quail was an aerial decoy missile carried by SAC B-52 bombers, and when launched could confuse and reduce the effectiveness of enemy surface-to-air radar systems. It would be used during bombing missions to confuse enemy radars by mimicking the exact radar signature, speed, altitude, and maneuvers as actual bombers. 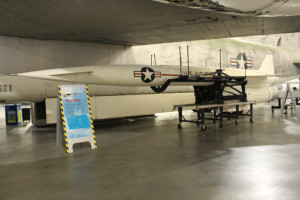 The Hound Dog missile was designed as a long range defense suppression missile to be carried in pairs on the under-wing pylons of B-52 Bombers. When When launched at high altitude the Hound Dog's 1 megaton warhead could strike a target nearly 500 miles away, having been guided by an inertial guidance system and targeting information supplied by a computer within the B-52. Also, the B-52 could utilize the Hound Dog's jet engines for supplemental thrust during high-weight takeoffs. It was operational with SAC between 1961 and 1976. 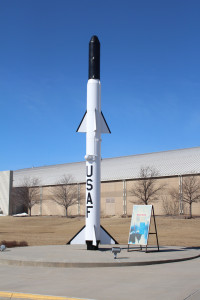 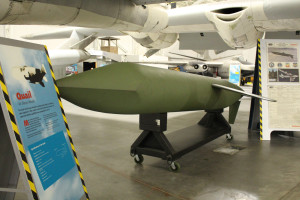 The AGM-129A was a subsonic, turbofan-powered, air-launched cruise missile. It was harder to detect and had greater range and accuracy than the AGM-86 Air-Launched Cruise Missile (ALCM). B-52 bombers could carry up to six AGM-129A missiles on each of two external pylons for a total of 12 per aircraft. Launched in quantities against enemy targets, the ACM's difficulty to detect, flight characteristics and range resulted in the high probability that enemy targets would be eliminated. The AGM-129A saw service 1990-2002.
Back to All Aircraft
Next Aircraft