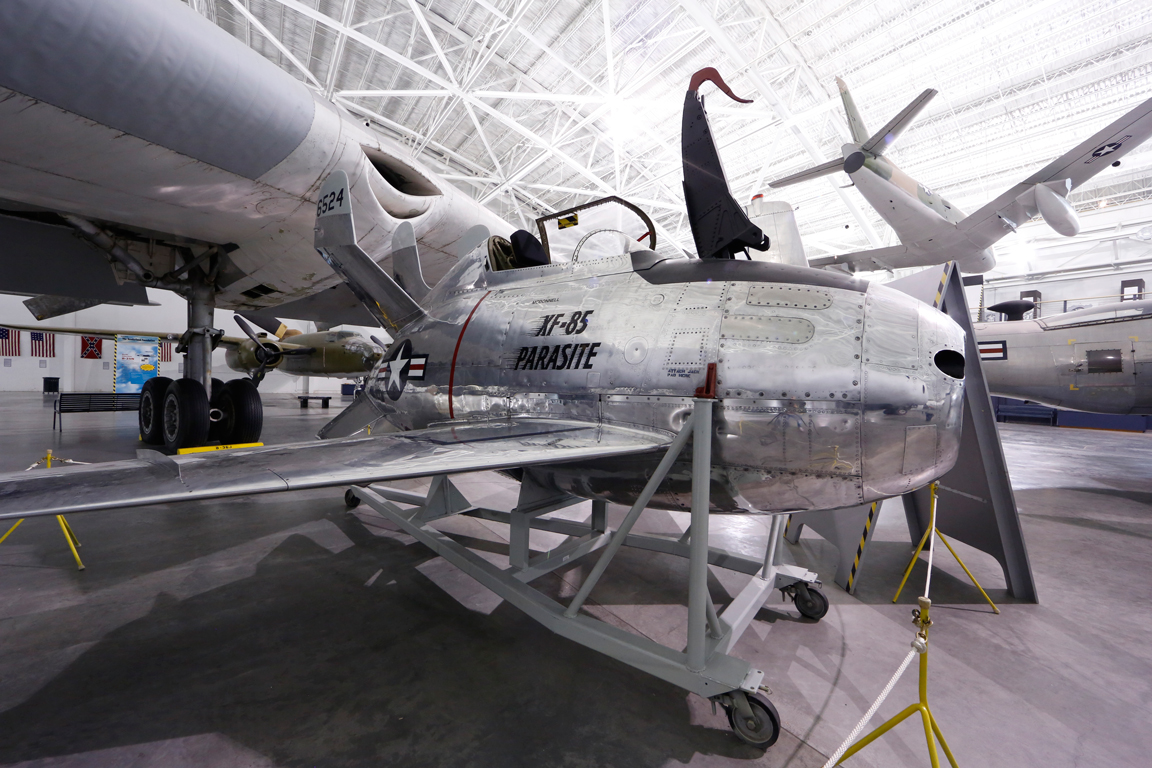 “A good idea that never quite worked”. In 1947, the parasite fighter’s prospect looked so good that the Air Force directed Convair Aircraft to modify all B-36 Peacemaker bombers after the 23rd production model to include a trapeze device in the forward bomb bay. It was planned that only one F-85 Goblin would be carried, although the bomber could carry three planes. There was speculation of modifying some B-36s to serve as carriers for several escort fighters.

In August 1947, the USAF had second thoughts about the parasite fighter’s possibilities and restricted procurement to two prototypes. McDonnell unveiled the first XF-85 and modified a B-29 into the EB-29B “MONSTRO” to take the trapeze which would engage the fighter’s retractable hook.

Testing of the first XF-85 began at Muroc Air test Center, now Edwards AFB, California, in June 1948. The plane made five captive flights with the EB-29B during which it was lowered and raised on the trapeze, the engine started, and the control tested. On August 1948, the XF-85 S/N 46-0524 was launched and flown for the first time from a test altitude of 20,000 feet. The trapeze was fully extended and the fighter gently lifted away from the trapeze yoke. After clearing the parent bomber, the test pilot performed various maneuvers for fifteen minutes at speeds between 180 and 250 m.p.h. before attempting to hook up to the bomber.

It was discovered that the closer the XF-85 came to the mother plane, the stronger the resistance encountered from the air compressed by the two planes. More power was required to overcome this air cushion. However, the air also became more turbulent as th e fighter approached the bomber. On the final attempt to hook up, the pilot came in below and behind the trapeze at a high rate of closure speed. The fighter’s hook missed the trapeze by inches and the canopy struck the trapeze and shattered. The pilot mad e a successful emergency landing on the dry lake bed runway. Over the next ten months several similar incidents occurred, and McDonnell recommended suspending further recovery tests. The opinion was that if an experienced test pilot was unable to perform a successful recovery, combat pilots stood very little chance of completing recovery operations. The XF-85 project cost $3,210,664 and flew a total of two hours and nineteen minutes.

Back to Collection
Missiles